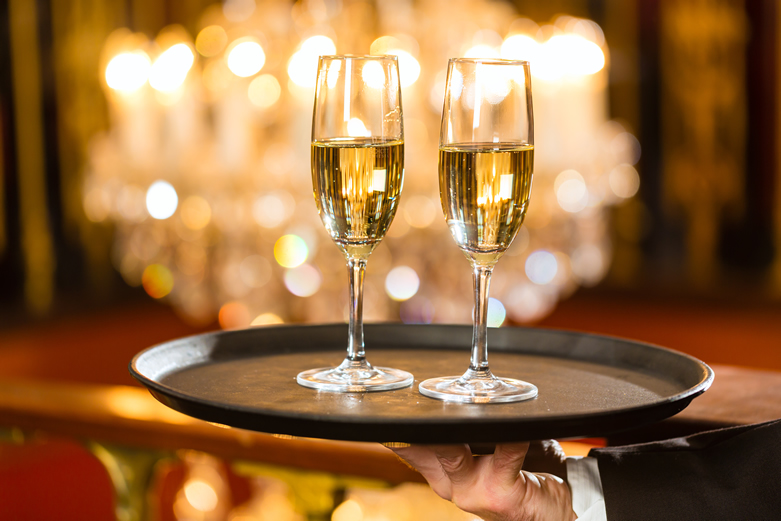 Although it is accepted as the indispensable drink of celebrations or entertainment and nightlife, the struggle for the emergence of champagne and to survive until today; When you read the story of blood, sweat and tears spilled, your view of champagne changes. Then you don’t pop the champagne and approach it in the most gentle way so that not a drop of it spills out. Since all values ​​have been reduced to the quantitative category today, thoughts such as how expensive champagne is or the best champagne is the most expensive champagne have arisen. It would seem, then, that Marilyn Monroe bathed in a tub filled with 350 bottles of champagne as well. However, when you examine the historical side of champagne, things like the price of champagne, the number of champagne popped in one night, the use of champagne in various ways as a sign of wealth, lose their importance. Although, champagne was generally the expensive drink of the palaces due to its laborious and long production process, but it has always managed to maintain its reputation.

champagne-cellar Champagne takes its name from the Champagne region of France; Drinks produced outside of this region’s grapes and production method are called sparkling wine. See for detailed information.

So why was the name Champagne given to that region? M.S. The Battle of Châlons (Catalonian or Catalaunum War), which took place between the Hun Emperor Atilla and the Roman general Flavius ​​Aetius and his ally, the Visigoth king Thedoric in 451, in the region now called Châlons-en-Champagne, is known as the bloodiest war of the period, and in this war the two sides reached hundreds of thousands. inflicted losses. At the end of the war, the Hun armies withdrew from the plain and, as historians say, “Western Europe was saved from being wiped out from the face of the earth.” The region was named Champagne in memory of the great army camp (campania) established by the Romans against the Hun Emperor Atilla.

The Champagne region was at the border of the civilized world and barbarian peoples at that time, and the region was under constant attack due to its wines. Reims was conquered by barbarian armies A.D. It was completely destroyed in 355. The Frankish King Clovis, who dominated the region with the collapse of the Western Roman Empire, was baptized by St. Remigius in the Reims cathedral on 25 December 496; In this way, Reims became the capital of the French Catholic world and French kings were crowned here until 1825. Numerous monasteries were established in and around Reims, and the Champagne region prospered.

In Europe viticulture and wine production were run by the church; Especially in the Middle Ages, the nobles who participated in the Crusades would leave their goods to the churches. When the vineyards of those who could not return from the expeditions remained in the churches, the Champagne region experienced its golden age in religious and political terms until the 17th century, and its wines reached Rome.

Dom Pierre Pérignon (1638-1715), who went down in history as the father of champagne, decided to become a priest at a young age as the son of a famous family. He joined the Benedictine order at the age of 17, and in 1668 became responsible for both the financial affairs and ties of the monastery. During this period, he loses his eyes due to a disease, but his sense of taste is very developed. According to rumors, when he tastes a grape, he can tell in which vineyard it was grown. The Champagne region tried very hard to prevent its wines from frothing, because frothing was not desired at that time. It is a well-known fact that the bottles burst due to the second fermentation, and many people were injured and blinded. This is probably why Dom Pérignon called sparkling wines the Devil’s Wine (Vin du Diable). At the end of 1600, Dom Pérignon and the priest Frère Jean Oudart turned to the production of sparkling wine. Dom Pérignon is said to have said to his assistants, “Come quickly, I’m tasting the stars,” when he tasted their first sparkling wine. In addition, Dom Pérignon was the first person to make the classic cupping consisting of Chardonnay, Pinot Noir and Pinot Meunier grapes used in champagne production.

It is a known fact that famous names in history have a passion for champagne. King of France XIV. Offering champagne played a major role in the flamboyant invitations of Louis (1638-1715) and his mistress, Madame de Maintenon.

Ruinart, the first company to produce sparkling wine in Champagne, is actually a textile manufacturer, like the other manufacturers that followed them. The main business of the company, which started by giving champagne gifts to its customers, became the production of champagne in 1729. They are followed by Taittinger in 1734, Moët in 1743, Roederer in 1760, Cliquot in 1772 and Heidsieck in 1785.

Another very interesting information about champagne is the King of France XVI. It is related to Louis and Queen Marie-Antoinette. The flat champagne glass was made by molding Marie-Antoinette’s breasts, and Heidsieck produced a champagne named Marie-Antoinette in honor of these glasses and presented to the queen. After these glorious days, King XVI of the French Revolution (1789). Louis was captured, tried for treason on December 11, 1792, executed by guillotine on January 21, 1793.

inflicted upon him. King XVI. Louis has one last meal with his family, and it is rumored that he and Queen Marie-Antoinette drank a bottle of Heidsieck at this dinner. The French Revolution lost a lot of champagne customers. The persons to be sent to the guillotine are determined from the notebooks of the seized champagne producers.

Napoleon-Bonaparte-Champagne Champagne gains value again with the intervention of Emperor Napoléon Bonaparte. While drinking champagne, Napoleon said to his friend, governor Moët, one day: “When you win, you deserve champagne, when you’re defeated, you need champagne.” With the great efforts of Dom Pierre Pérignon, champagne is a noble drink and although it enters the palaces, it is the widow Nicole-Barbe Cliquot Ponsardin who made champagne a worldwide drink. At that time, Cliquot’s most important customers were the Russians, and the Russian market was what kept the champagne alive. The Russian Expedition was the breaking point for Napoleon. In the Battle of Borodino, which took place on September 7, 1812, Napoleon’s army entered Moscow. The Russian Tsar does not agree to a peace treaty; Napoléon, who had been waiting in vain for the Tsar for forty days, had to retreat from Russian lands due to winter conditions and lost most of his army during this retreat. Napoleon is overthrown twice. According to one rumor, he drank champagne one last time with his friend Moët before going to surrender to Paris. The Champagne region is occupied this time by the Russians; In this region, production cannot be done in peace. Already during the second fermentation, the bottles burst due to the pressure in the bottles and almost half of the wines are wasted. On top of that, phylloxera (grapevine lice) epidemic emerged and caused the drying of millions of hectares of vineyard. The Phylloxera pest, which was first seen in Germany in 1874, originated in America and spread to Europe with immigrants.

champagne-cork Despite everything, the production of champagne never stops, its quality gradually increases and becomes more widespread. The relationship between sugar and yeast was resolved by Louis Pasteur in 1857. While investigating the conversion of sugar to alcohol by yeast, Pasteur came to the conclusion that fermentation occurs by a living structure found in yeast cells. He wrote of the process he called “fermentation” that “Alcohol fermentation is related to the organization of life and yeast cells, not the death and decay of cells”. After centuries of experience and the discoveries of scientists, there is now a sugar ratio to be added to champagne and the bottles stop exploding. Sparkling wine production becomes widespread in other countries, but after all these historical events, champagne differs from other sparkling wines due to this great experience and regional characteristics.

By 1900, champagne sales totaled 30 million bottles a year. It is now the indispensable drink of entertainment venues. Champagne is served to customers in flute goblets on Blood Blood dancers’ suspenders. It has also become fashionable to drink champagne from the shoes of actresses.

war-and-champagneThe year is 1914, the First World War breaks out, and again the Champagne region is devastated. As a result of the German armies attacking the French and British troops, half a million soldiers from both sides die and those lands are once again watered with blood. Reims was once again razed to the ground. Since the Russians are the most important customers of champagne, the October Revolution of 1917 affected the champagne producers badly. This economic depression in which the champagne producers were deeply deepened due to the alcohol prohibition (Prohibition period) in the United States, which started in 1920 and lasted until 1933, and the worsening of the economic situation in Europe. Meanwhile, Hitler came to power in Germany and the war-filled years are about to begin for France. In 1939, World War II breaks out; The world’s largest war, in which 100 million soldiers participated, has begun. France is invaded by the Germans and the Champagne region is once again dealt a major blow. The Nazis send officials from Berlin to control the wine production and trade. The German army confiscates most of the champagne. Champagne producers are left in very bad shape. They are punished for the slightest resistance or objection. The famous Bollinger family, the champagne producer, is also punished for their objections, and the family’s cellar and all their assets are confiscated. In 1944, the Allied forces break through the German front with the Normandy Landing and the German armies retreat. As a result of the bombing of the Champagne region by the Allied air forces, those lands are damaged again. In this bombardment, Bollinger’s winery becomes unusable. Fortunately, the Germans had to leave the area before they could ignite the explosives they had placed in the cellars of the famous champagne houses. But the allied forces that settled in the region also create a champagne reserve for themselves.

It is rumored that Field Marshal Hermann Göring said, “I realized that day we lost the war,” that on April 20, 1945, champagne was served on Hitler’s last birthday. After the Second World War, Champagne begins to experience its golden age.

Inston Churchill was successful in war and, repeating the words of Napoleon, said: “When you win, you deserve champagne, when you’re defeated, you need champagne.”

When we come to the present day after such a sad, tragic and drama-laden history, we see that approximately 300 million bottles of champagne are produced every year. Below you can find the champagne producers and their approximate production quantities.

Now, after looking at the history of champagne from a different perspective, what will you think about this noble drink? From now on, when you take a champagne glass in your hand, how will you feel while “sipping the stars”?